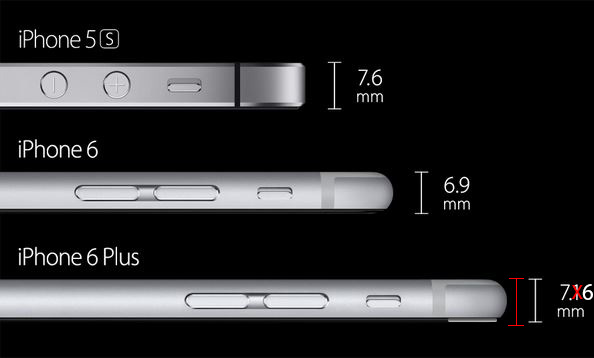 How’s that for keywords in the title?!

Hey Apple, I know you’ve been busy with they keynote and all, so I went ahead and fixed the screenshots for your iPhone 6.  You forgot to show the camera sticking way out of the phone on the top right side.  It’s a subtle, but very important omission. Here you go: come.  I get how it may be an obvious mistake not to have noticed how the camera sticks way out of the phone.  I mean, all of your demo phones are sitting up on holy pedestals like this one on the left, so you may have never actually set the phone on a flat surface like say.. A desk, or counter, or cabinet, or table.  That’s usually where I sit my phone, as the dang thing just won’t stay on my wifes exercise ball.

Don’t get me wrong,  I’ve probably got 5/16 spade drill bit in my garage I could notch a hole in my desk with to have the phone slot down in there, but my old phones non-lightning cable connector probably won’t charge the Ryobi battery without a $35 dollar adapter, so I’m likely going to have to settle for setting it on the desk.

I had a few extra minutes, so I wen’t ahead and fixed one more screenshot you seem to be using a lot.  It’s confusing with all the different options out there, but the thickness of an item is actually the dimension at the widest point, not the thinnest.  Sorry to break this to you after the keynote.  I wasn’t aware you’d design a completely worthless unusable phone with a protruding camera that won’t sit flat and can be only used with an obnoxious overpriced case.  You may want to send me some prototypes before you’re next release, and I’ll give them a 5-second look over and save you the embarrassment before they ‘big show’.

As a quick tip: You may want to omit the ‘weight’ and ‘thickness’ categories from your spec sheet, as they don’t really mean a single thing, seeing how you can’t use the phone without the added weight and thickness of the case.  The phone is essentially useless out of the box.  I see you have had the oversight to adopt omitting important technical specs from your phones for several years (like RAM, and Processor speed), so this should be a fairly easy modification to push the ranks.  Here are those fixes.  I’ve of course made up my thickness number as my I left my Caliper in R&D. But hey, the free U2 album is great, was just out of this world, completely un-related to the iPhone, and would have been super sweet.. in 1985.